Last year I was given an amazing opportunity to be filmed as part of an episode of Escape to the Country, and I’ve been delighted this week, finally after six months, that the episode aired on BBC One and BBC Two. 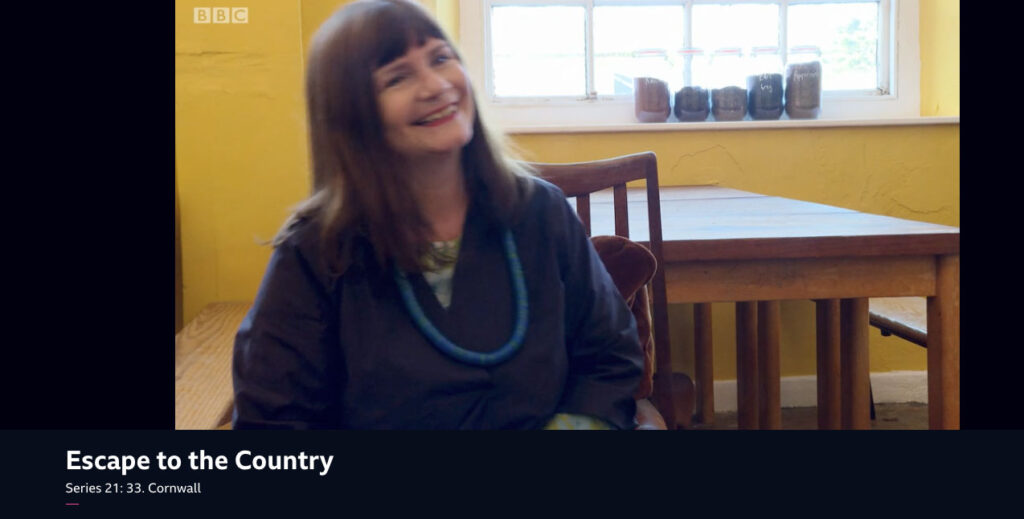 In October 2020 out of the blue I received an email from the production company who make the property TV show Escape to the Country, and who were researching content for an upcoming episode that they were filming in Cornwall.  The producer had found my website through a Google search (looking for art and design in Cornwall), and wanted to know if I would be interested in being featured. The house-hunter, Viv, wanted to become involved in art and design when she moved to Cornwall. The producer explained that the format would involve chatting to me about my designs, inspirations, living in Cornwall, being part of a creative community, and then followed by a creative activity which Viv and her friend Karen could take part in. I suggested lampshade making with my fabric designs, and they were delighted with that idea.

A suitable location – Krowji and the Old School House

My next thought was to find a suitable location to film. Whilst we weren’t in Lockdown, Covid restrictions were still in place. I work from my home in Redruth, and in a small workroom, so that was out of the question. In the middle of the night, I had a thought – my friend Dawn who has a studio at Krowji had only just contacted me with photos of her studio, she was looking for someone to share it and I had passed on the details to our Makers Cornwall group. I messaged Dawn and asked her if I could hire her studio for the day, as it would be perfect for safe distanced teaching – enough space to keep everyone safe during filming. My lovely friend Dawn let me borrow her studio free of charge. Dawn is an incredibly talented clothes designer, and she makes the most beautiful ethereal wedding dresses from her Krowji studio, and for the day she cleared away all the tulle and chiffon to make way for me and my lampshades (and a film crew, and Viv and Karen!)

Dawn’s studio is part of the old school house, where Krowji is now based.  It is a wonderful space, with parque flooring and large windows, and Dawn has a large table that she usually uses for cutting out her wedding dresses.  Perfect for a safe filming and to teach two people how to make lampshades!

The producer hadn’t heard of Krowji, so it was a wonderful opportunity to introduce the film crew to this amazing hub of artistic talent, right in the centre of Cornwall in Redruth.

My own connection with Krowji is that I also work there part-time (pandemic allowing) as the digital and design officer for a wonderful charity called Cornwall Heritage Trust.  I would love to have my own studio there one day too, and they have just expanded and built a brand new building so who knows!! Fingers crossed!

If you would like to watch the Escape to the Country Cornwall episode on BBC iPlayer, it is available to watch here (I’m about 15 minutes into the program) : https://www.bbc.co.uk/iplayer/episode/m000v4k1/escape-to-the-country-series-21-33-cornwall 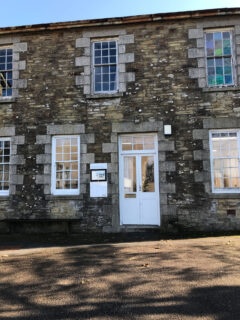 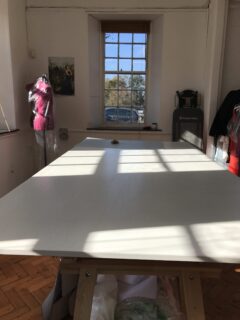 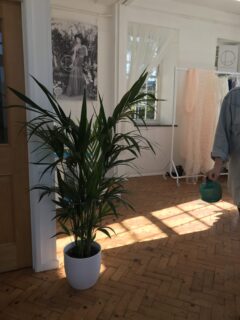 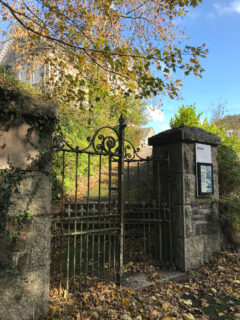 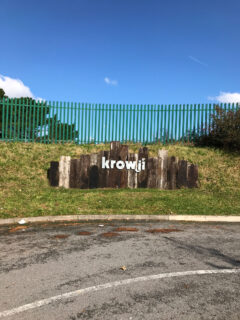 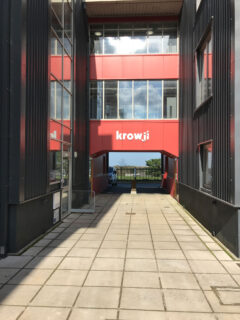 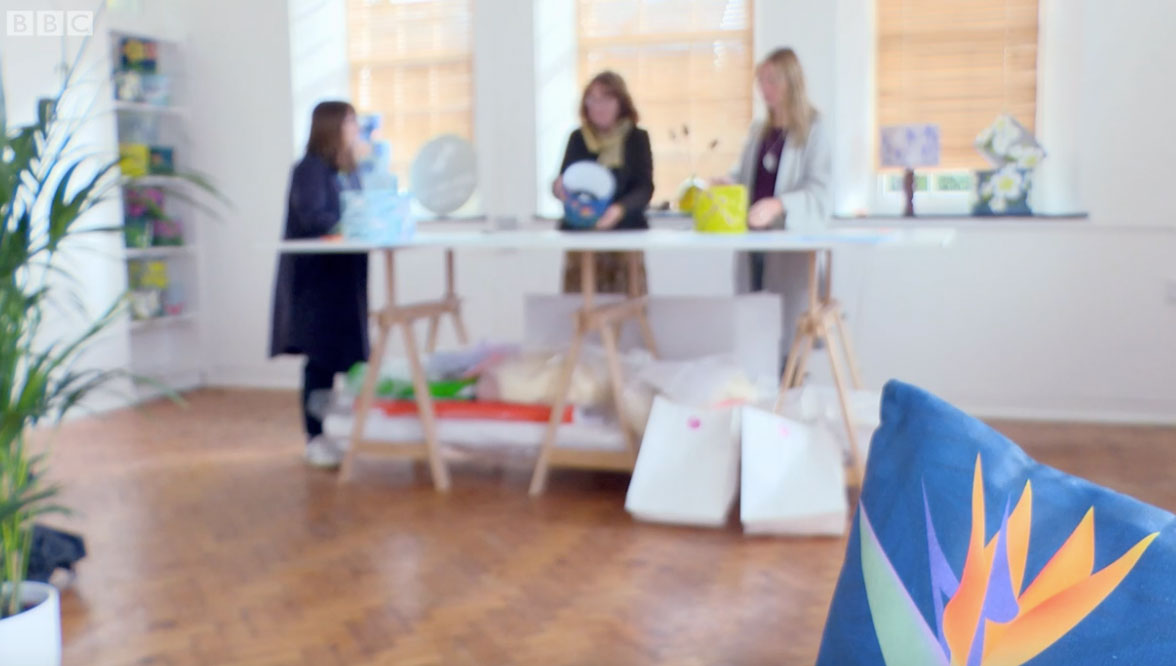 How the day of filming went, and meeting Viv and Karen

I set up Dawn’s studio with my lampshades, and got the lampshade fabric and kits ready for Viv and Karen.  I was due to meet them in the cafe at Krowji, but I wanted to have everything ready in advance so that they could select which design they wanted to use to make for their own lampshade.

I met the film crew first, and then we made our way to the cafe.  An area had been set up within the cafe, safe distanced seating for a casual chat where I would first meet Viv and Karen.  As I sat down, one of the cafe staff came up and asked me to move as they were filming! (I had an embarrassed chortle to myself as I was feeling quite apprehensive at this stage).  I needn’t have worried though, because as soon as I met Viv and we started chatting, I realised why the clever production company had put us together.  Viv had worked as a buyer for some pretty major homewares retailers, and had over 30 years experience in the retail industry.  When she was living in South Africa she had set up an artists cooperative, using her connections in the retail industry to provide a bridge between local artisans in South Africa and the buyers in the UK and Europe.  I began to relax and enjoy the filming and most of all chatting to Viv and Karen who were both from artistic backgrounds and both have a lovely warm and friendly manner.

After several takes in the Cafe, we moved over to the studio.  We chatted about my designs, and inspirations and shared stories about our love of flowers and in particular the Strelitzia (Bird of Paradise Flower) that Viv was so fond of from her garden in South Africa, and that I grew up with in the tropical gardens of my childhood in the Pacific.

We then began to make our lampshades. I had laid out all my fabrics ready for them to choose which they would like to use to make up their very own lampshade to keep. I have all my designs printed onto cotton in the UK, and I usually make all my lampshades to order.  Viv chose the Strelitzia (naturally!) and Karen has Verbena bonariensis in her garden so she chose that design to make up a lampshade.  I had decided beforehand that a 20cm diameter shade would be the best size for us all to make, as I thought that this would be the simplest to start with as beginners.  These kits are available from Dannells website if you want to try and have a go yourself!

We were very cautious of being safely distanced, and so it was perfect to stand around Dawn’s large table.  I found it really easy to chat as we were filming, and shared lots of stories about my inspirations – from my love of flowers, to family events and my grandparents.  One of my designs has been inspired by my grandparents, who grew up in Perranporth but who ended up living in Kolar Gold Fields as my grandfather was a mining engineer.  As I was telling this story, one of the production crew was amazed, as he had been to the Kolar Gold Fields with Michael Portillo filming on a different program.  It is a very small world!!

After a day of filming, and a lot of talking on my part, we started to wind down and the camera crew took photos of the cut away shots.  I packed away my lampshades and all my bits and vases into the car so that I could rush off to take the dog out and pick up my partner from work.

I can honestly say that I really enjoyed the whole experience, and the bonus for me was to meet Viv who has now moved to Cornwall!  We are planning a dog walk and catch up this week, and I can’t wait to introduce her to the artistic community in Cornwall that I’m proud to be part of.

If you have the opportunity to do something similar – I would say go for it! You never know what will be the outcome, you might get to meet some people you connect with! 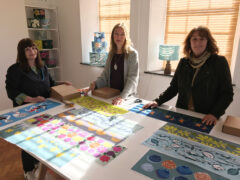 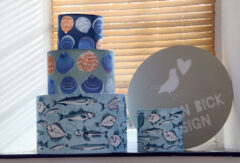 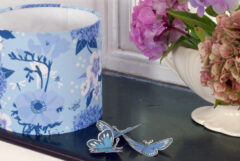 Business Support that has been invaluable to me

When I asked the production company researcher how she found me, she said my website came up in a Google search. I think I had a lucky combination of circumstances happen that made this come about.

First of all, I had signed up to Unlocking Potential, an EU funded programme that offers support to businesses in Cornwall.  I had received a grant to pay for a photo shoot by Anya Rice, and this took place in March 2020, just before the first lockdown.  I took the opportunity to update my website with the new photos.  I also had a two hour SEO session with a local company called Eightwire, and a series of one to one sessions with the Unlocking Potential experts on marketing and finance, all funded by Unlocking Potential.

I’ve been very fortunate to have had the benefit of some good sound business advice, workshops and support from The Design Trust. I’ve been a member of The Design Trust Business Club for a couple of years, and have followed the Dream Plan Do Business planner to help keep my business on track.  When I first started my business I signed up for an online workshop with The Design Trust so I was delighted to actually meet Patricia van den Akker at an Etsy conference a few years ago, and I invited her to come to Cornwall to run workshop days for our Makers Cornwall group.  Her no nonsense and straightforward advice has been absolutely invaluable to me and so many other small creative business owners like me.

If you have a small business and thinking that you need a bit of a kick up the old proverbials to move forward, I can highly recommend signing up for The Design Trust, and if you are in Cornwall, get in touch with Unlocking Potential.  It really is worth spending that time and hard work constantly tweaking and trying to get the sweet spot with your business, and trying to find those connections with your customers – even if it has had to be online for the past year!

My Grandparents – my inspiration behind my Vintage Surf Collection

Makers Cornwall – the group that I’ve set up with some fellow makers, that started out in 2016 as being a group of Cornish Etsy sellers and has now evolved and expanded.

Cornwall Heritage Trust – I work for this charity part-time as their Digital & Design officer.