Since I started my design business in 2014 and joined the wonderful online community of artists, crafters, makers and designers there is a common theme that rears its ugly head every so often.   I had read other people’s posts of frustration upon finding out that a large company had copied their original designs, or that someone had decided that it was a good idea to rip off someone else’s good idea, and being new to this design world, and a tiny fish in a very big pond I never imagined that it would happen to me.

I use social media to promote my business, to keep in touch with friends, fellow makers, existing and potential customers.  It is a great way if you are just starting out to pipe your own trumpet.  I use Facebook, Twitter, Pinterest, Instagram, LinkedIn, and juggle news around each platform as soon as I’ve got something interesting to sell or share.  I’m quite an open person, so was happy to share bits of information about techniques, suppliers, etc with my new found friends on social media.

A bit of background about me and my designs: 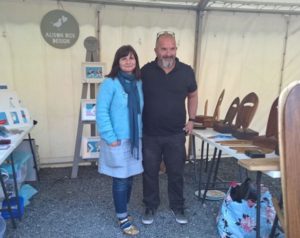 One of my best selling range of illustrations has been Vintage Surf, which were inspired by my family’s surfing heritage in Cornwall. My grandparents both grew up in Perranporth in Cornwall, and my grandmother’s family started surfing and making wooden boards after the First World War.

My brother Andy Bick makes wooden boards, his company is called Paipo Glide and he was a sponsor of the World Bellyboard Championships for many years.  The Champs were organised by the National Trust and took place in Cornwall each year in September. No wetsuits allowed and prizes were won for the best outfits, which involved a lot of flowery hats, fifties swimsuits and all in one knitted stripey costumes for the men which sag upon contact with water.  I used to go to the champs to support Andy, and was so inspired by the vintage costumes that I decided to illustrate them, combining my family’s heritage as inspiration.

Copying is not a Form of Flattery

Anyone who sets up their own business as a sole trader knows what a hard slog it is, promoting, making, designing, finding new stockists, buying a stall to sell at fairs, juggling cash flow.

In May 2016 I shared my new designs which I had been screenprinting at John Howard Print Studios.

A couple of months later was horrified to see plastered all over his facebook page a set of illustrations which were so similar to mine, and that he called Vintage Swim.  After contacting him, he assured me that he was only selling them in the Lake District.  Unfortunately for him, we also have the internet here in Cornwall, so I could see that he had been selling them on Etsy, Folksy, his own website, and featured on his Twitter and Facebook feeds.

I also read on his Facebook page that he was planning to launch mugs in his new design Vintage Swim.

What I did next:

Absolutely fuming, and feeling sick with rage, heart palpitating I sought a lot of legal advice.  I am a sole trader, and most of my income is spent on keeping my business going and buying materials, so I hadn’t budgeted for a large legal bill at this stage of my business.

Finally a couple of weeks later, I received a letter from his solicitor, agreeing that the designer would not sell the work, and remove it from any sale point, online or physical.

The moral of the story:

Be original. Create your own work and your own ideas from within. Don’t use someone else’s work as your starting point. Keep records of your work and process.  If possible digitally date your work. Above all be kind and respectful.  We are very VERY lucky to be part of a wonderful creative community with some talented makers and designers who are happy to share their knowledge with each other.  That doesn’t mean that they will tolerate their work being copied.

Some useful info on Copyright:

If you copy or adapt someone else’s work you are in effect breaking the law.  If you adapt their work, it is considered to be DERIVED WORK, it will still be their work and they have a right to object if you publish or sell that work.  They are also entitled to any of the money that you make from selling their derived work.

In August 2018 I was contacted by a friend congratulating me on designing the World Bellyboarding Championship artwork.  When I checked what she had seen, I was so dismayed to note that the poster included an element which had obviously just been lifted from my Tamblyn Girls design.

When I initially contacted the designer, they initially denied the similarity, but eventually acknowledged that they had used my design without authorisation.  As they had already had two bellyboards and 200 tee shirts printed with the copyright infringed artwork, I agreed to sell them a one off, one day license to use the artwork.

I had legal help to write two documents, an Infringement Letter and a Licence Release form.

I think what I found so upsetting was that I had been a big fan of the World Belly Board Championships in its original format, and that these designs were inspired by my family’s surfing heritage in Perranporth, and that there was such a blatant disregard for the ownership of my original work by the organisers.

This is my original blog post about the inspiration and my family story behind my designs. 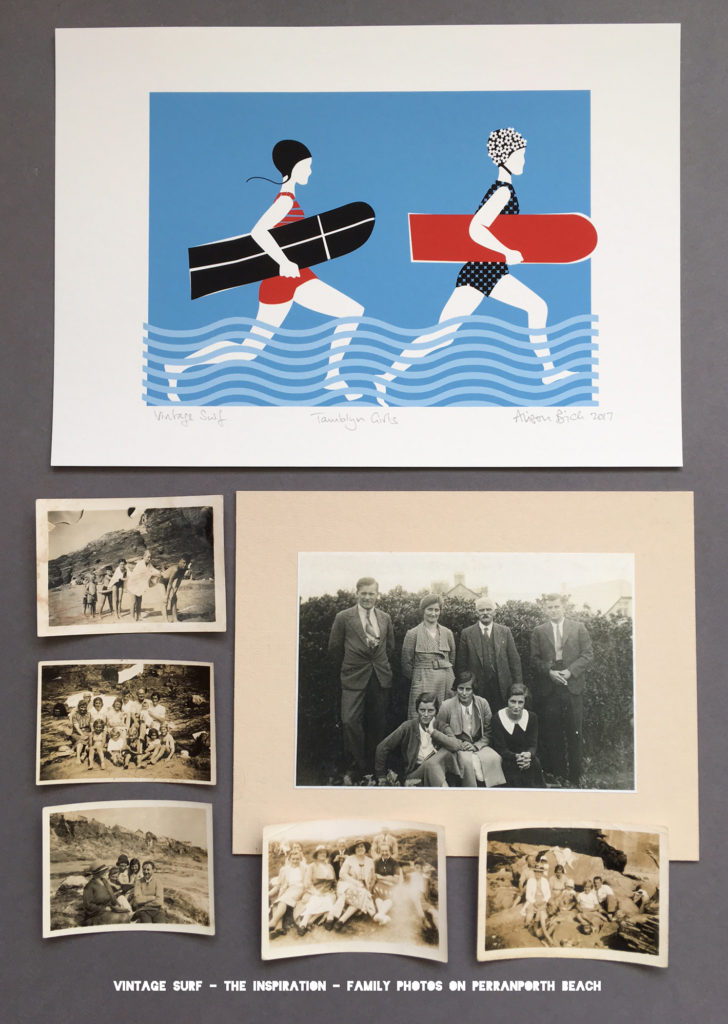